Everyone knows what a photo bomb is, but only devoted readers might know what a story bomb is. Story bombs are when authors put in names, titles, or even passages/quotes from other novels, usually ranging from classic literature to modern day bestsellers. Not only is it an ode to a fellow author; it proves that writers out there have a sense of humor or at least an appreciation for literary nostalgia. And I, for one, am following in their footsteps.

Under A Melting Sun, my current novel, has become a subtle minefield full of story bombs. When you have a character whose backstory is a librarian, it just opens the flood gates, especially for a classic literature lover. 😉 Since Under A Melting Sun takes place in 1937, most of the bombs were inspired from the Victorian writers. I’m not sure if its because the Amazon rain forest has left an extremely dark impression on me or the story line itself has drawn out to be both intense and melancholy, but many of the name drops are from Gothic writers, such as Bram Stoker and Mary Shelley.

However, one such goth writer who I have to point out is Edgar Allan Poe. ❤ I added tidbits about Poe not just for the sake of story bombing but as a personal joke. If you know me, you know about my Poe obsession. So story bombing him was pretty much a given.

But while this all started out as fun and games, it has turned eerily realistic. Under A Melting Sun starts off as a very light and easy read, the main character transitioning from journal entry to present day as he lives with a jungle tribe while waiting for his friend to return. Even when his own people stumble into the story, his mood is very simple: he’s annoyed, agitated, and longing for home. Throughout most of the story, the mood changes smoothly from natural human reactions to realizations that filter in like sunlight through a dense canopy. But just as the meaning of the word “benighted” took hold of the atmosphere for The Benighted story, the backdrop of the Amazon Jungle has taken hold of the feelings of the characters in Under A Melting Sun.

The eeriness came when I was looking up more Gothic writers to add into the story in order to bring a little humor to a plot that was starting to turn sinister. It was then that I came across this statement regarding Poe from a Wikipedia article regarding Gothic Fiction:

“Poe focused less on the traditional elements of Gothic stories and more on the psychology of his characters as they often descended into madness.”

That’s exactly what’s happening in Under A Melting Sun. In reality, there are stories of people often going mad while traveling through the Amazon. There was once a huge fear of mutiny and uprisings among those who were exploring, and often the South American jungle took people’s health and their minds with 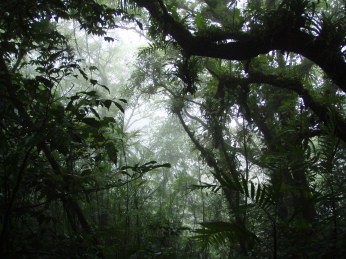 it. Although the story I’m creating used the group of anthropologists as a means to an end of keeping them in the rain forest, the outcome has become realistically unpleasant. The focus Poe had on the psychology rather than the characteristic of his story has filtered into my own storytelling, turning a rather easy read into a chaotic mess of human realism. The Benighted seemed to have been a practice run for what Under A Melting Sun is trying to accomplish.

So for future readers of this historical fiction, I offer you a little warning: no matter how cute and funny this story portrays at times, there’s always the calm before the storm.