I love how DC has finally decided to step up their game to compete with Marvel. I love that Henry Cavill played Superman, that the Man of Steel sequel will be including Batman, and that alongside the TV shows Arrow and The Flash they’ve made the soon-to-be must watched show Gotham.

But you want to know what I hate? The absolute lack of Dick Grayson in all these! 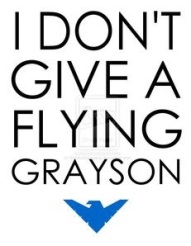 I give DC credit in the graphic novel realm. They allowed him to step in as Batman when Bruce Wayne “died” for a period of time. Once they got their act together to bring Bruce back in New 52, they made the smart decision in  rebooting Grayson as Nightwing. Probably the only reason they did this is (1) his popularity grew because *shock* people really do like his character, and (2) it was their way of giving him a medal after dealing with snot-nosed Damian Wayne who had filled the role as Robin. The only issue I have with his series is the outfit. Nightwing is notorious for wearing blue and black so he can be discreet and blend in with the night, but I guess DC figured bright ass red was just as subtle. Whatever, DC, you’re keeping him in the spotlight and that’s all that really matters at this point.

Oh yeah, and you STILL haven’t paired him back up with Starfire. Just like to point that out. I love Red Hood and the Outlaws, but come on! Team Starfire-Grayson is still out there! We’re still bitter about the wedding you had Raven screw up back in the 80s, and that whole trying to revive a romance between him and Batgirl/Oracle is nonsense. Starfire is such a bad ass character herself that she deserves a bad ass leading man (no offense, Roy Harper, its just that old flames die hard).

So let’s get back to that Reign of Shun…

The Dark Knight trilogy tried. They get points for adding in the Robin character. However, they get points deducted for waiting till the end of the last movie to do it with no plans to go on with it, and botching his name. Robin is an alias, NOT a real name. Did no one on that set read a Batman comic?? Pick up a graphic novel, Nolan!!

The sequel to Man of Steel is sounding amazing, and also showing no signs of even trying to add a Robin character. Apparently Snyder is too busy flirting with Star Wars instead of focusing on the Batman family. He’s over there trying to turn Henry Cavill into a Dark Lord while the rest of us are still waiting for a Dick Grayson movie…or cameo…or anything!

As for TV shows, still wondering if Arrow is going to do something with that Bludhaven reference they teased us with. And don’t get me started on Gotham. According to that show, Grayson isn’t even born yet.

So DC, if any of your people read this, Dick Grayson fans are still waiting. Waiting and watching. And waiting. 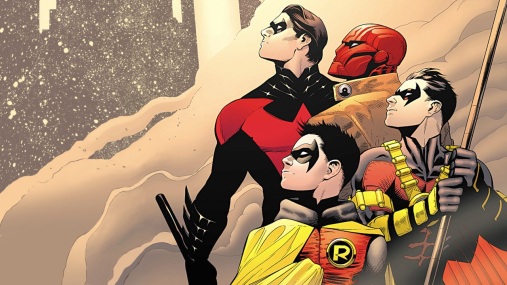