Since its been a rough week, and I can’t find any satisfying writing quotes to post, I’ve decided to do the next best thing:

Why create such an operation? First off, why not? Its Norman Reedus. Daryl Dixon. Hillbilly bad ass. Second off, he’s coming to the FIRST ANNUAL SACRAMENTO COMIC CON. This, for me personally, has fulfilled a vow that I took last year: that in 2014, I would make it to a comic con. And BAM! My hometown decides to have its first this year. But not only is Sacramento FINALLY having its own comic con, Norman Reedus is going to be one of the awesome celebrities visiting for it. So that’s why I’m creating this operation. To not only follow the vow I took, but to make it that much more memorable by meeting this beloved actor. Even for 10 seconds to get a photo or autograph.

So for anyone willing to join in on this mission, here are the details:

1. This is a tricky step. In fact, a few won’t make it. But for the heavy hearts out there, just remember that the first step is always the hardest. So with that said, Step 1 is to just show up. You actually need to be physically present in order to even start this mission. I know, its hard, but think of it like buying a lottery ticket. You can’t play unless you pay. So abandon your computers, game consoles, and graphic novels for just a few hours, and take one for the team.

2. Dress code. Step 2 is all about the dress code. If you want to meet Norman Reedus, you’ll have to be creative. Do you think he’ll just meet anyone? Hell no! I suggest throwing some paint on and masquerading around as a zombie. Why? Because it’ll bring out the Daryl Dixon in him. Yeah, he might try to take you out with his bow and arrow, but hey, he thought about you long enough to take aim. Feel special. Feel very special. Especially if he busts out the knife. That means he wants to get up close and personal with you. Just saying, ladies. 😉

3. After you’ve given the bouncers your paycheck and enter comic con dressed in your fine undeadly attire, you’ll need to advance to Step 3: follow the signs and watch the female fans. I’m not saying on a perv level; I’m talking about the hot chicks who end up always finding the damn celebrities to take selfies with. They’re like freaking bloodhounds at these events, and always end up nailing a photo or autograph with a famous person (sometimes nailing the famous person themselves, but who am I to judge). Luckily for us, we can all smell bullshit a mile away, so it wont be hard to spot and track these posers. So despite the fact there will be visual aids such as posters and VIP passes strapped around people’s necks, keep your eyes and ears open for your fellow Walking Dead fans.

4. When you finally reach the line, and there will be a line, for either a photo op or autograph opportunity, go for Step 4: make sure you have well over $100 in your back pocket for the person collecting the money at the end of the line who will make or break your day. I know the economy isn’t all that great, and most of us are living paycheck to paycheck, but now is not the time to be going over figures. Now is the time to step up with that money in hand and put your photogenic face on. Its judgement day, people! Those tips you’ve been saving up for that video game? That video game better be titled “meeting Norman Reedus in person with a signed photograph to prove it”!

5. The final step. You’ve made it this far. You should be damn proud. Step 5 is probably the most realistic step that every single one of us has the chance to succeed at, and will most likely 100% complete. Step 5 is for when you realize you don’t have that kind of money to throw away, and that long ass line is making you miss the rest of comic con that you had sworn to see with your own eyes, you find a life size cardboard cut out of Norman Reedus and you instagram the shit out of it! You better pose like a Victoria Secret model and special effect it into realism, because there are no other options at this point. Only you and your photoshop abilities.

So there you have it! For me, Operation Meet Norman Reedus will start bright and early on March 8. Good luck, friends! 🙂 Hope to see most, if not all, of you there! 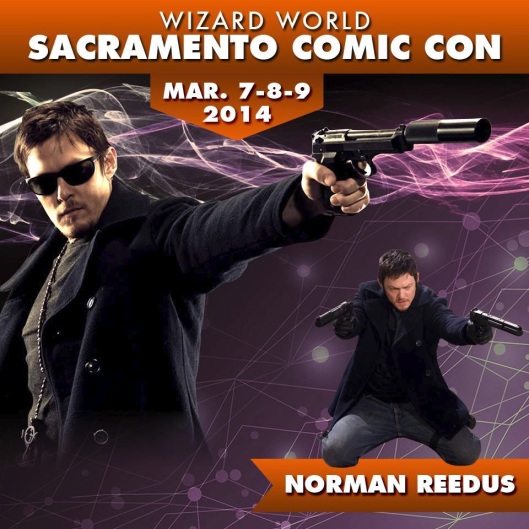